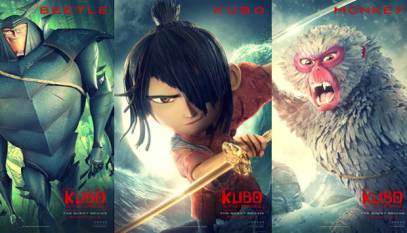 I saw the film Kubo and the Two Strings tonight and as much as I want to stay with y’all and chat, my eyes are failing me.

The film was good. It was jam packed with both wit, wisdom and just the right amount of humor to not overshadow the seriousness of the theme of the story.

A film about finding one’s “story” and mainly about life, love, and adventure, I want to share one particular scene. I have two reasons. I f you were to ask me which I would prefer, sun or moon, I would without a doubt, choose the moon. Imagine the surprise when an unknowing gal finds out the villain of this film is the Moon King! Well, that seems a little too immature and so let us move on. The second reason is the scene itself. The dialogue brought me back to certain points in my life where I did feel the villain’s agony and his qualms on humanity. It also made me remember another character from another story I love reading.

Years ago, I also wanted to be like the Moon King; selfish. I, too, wanted to be blind from all the wars and famine humanity was seeing experiencing daily. I wanted, too, no part in the weakness they so called love and passion. But now, I know better. I know, now, after finally having met the right kind of people, that memories make us who we are and these are the only things we can carry with us. These are the things that can either make us weaker or stronger as the years go by.

In an anime, One Piece, one admiral, Admiral Fujitora,

purposely blinded himself so that he could not see his carnage. He has seen too many deaths and has done too many wrongs in life, or so e says. But he meets Luffy and he regretted his decision. Luffy’s honest and upfront way with life made him realize that life is not always about the negative things but also about the positive things, too. He regretted not being able to see the face of the opponent he found himself admiring.

This, of all the lessons Kubo and the Two Strings, had to offer is what I wanted to share. NO matter how hard your day, always remember that these “worse” things are always better felt, seen and experienced with our eyes open.

And though memories are not unique to anyone; as even the antagonists in our stories have theirs too, we have the choice to remember them the way we want them to.

I do not advocate too much lying here. In the film, the moon king got defeated by the hero and became mortal. The village people, in an attempt to change him, showered him with ‘false’ ideas of who he ‘was’. This is not what I mean when I tell you to remember things in a positive light. What I mean is that you must TRY to not always be so serious and just see life as it is. The magic in the story was not Kubo’s strings in his shamisen, but what they were made of.

And so, to end this rant, 5 quotes from the film. The fifth, an ironic one if you saw the film.

Film: Kubo and The Two Strings

18 thoughts on “Admiral Fujitora and the Moon King”